Sarajevo in 1992 was a city under siege. It was not a place you wanted to be, and definitely not a place you wanted your children to be. Yet that was where four year old Lejla Hasandedic found herself. She left on the last bus to get out of the city before the siege hardened. Her parents were waiting for her in Mostar, the city famous for its beautiful 16th century bridge. There had been very little communication between the two cities in the preceding months and for a time her parents thought their daughter had died in Sarajevo. When she came to Mostar the war had not yet started there. They were supposed to be safe. A few weeks later the conflict that was gripping the entire territory of Bosnia-Herzegovina reached them.

Lejla Hasandedic spent her childhood in the Bosnian War. From the ages of four to eight she lived in various different dark shelters, hiding from shelling and gunfire, constantly worrying about whether relatives and loved ones were still alive.

Today Lejla is a clinical and research psychologist working at a clinic in Sarajevo. In her free time she is a youth ambassador for the United Religions Initiative, an NGO which works to bring people of different faiths together. Since the age of 15 Lejla has led a two-track life: At the same time as she completed her education and started a career, she has been working on peacebuilding efforts in Bosnia-Herzegovina and especially in her home town of Mostar.

Being raised during the war and the atmosphere of suspicion which followed it, Lejla – a Bosniak – could easily have become suspicious of members of the other ethnic groups in her country. That changed with one event when she was eight years old. This is how Lejla describes it: “In the streets one day I met a girl from another part of the city. I became so excited that when I came home I exclaimed to my parents ‘I met a person who’s Croat from other part of the city, and she’s the same as me!’ We liked the same things, we talked about things like Barbie dresses and make-up, about Backstreet Boys and other things young girls were interested in. We didn’t discuss the war or all those terrible situations we had been through. She invited me to come to her place. My parents were very scared about that but they allowed me to go there. When I went there I saw that they were ordinary people like us. They were living the same lives as us. And then I started asking myself why we needed to hate those people when we could live together, enjoy together and learn from each other.”

Lejla started playing an active role in building bridges between the ethnic groups in her community when she was in secondary school. At the time the school system in Bosnia-Herzegovina was completely segregated along ethnic lines, but Lejla went to an experimental school where Bosniak and Croat children studied under the same roof. They followed separate curricula and had different teachers, but they were in the same building and so had an opportunity to meet. The two ethnic groups remained separated most of the time as school authorities were concerned about the potential for conflict if they came into too much contact. This started changing during Lejla’s first year at the school, when she and some of her fellow students from both ethnic groups set up a joint student council. They received meeting space from the school and had the opportunity to work together across ethnic lines.

This proved an invaluable opportunity for a city which was still largely divided. One of the most important and symbolic activities of the student council was crossing the iconic Stari Most bridge together. The Stari Most bridge was built in the 16th century and is one of the most famous buildings in Bosnia. It was destroyed during the war but rebuilt following it. The bridge is a world heritage site and a popular tourist destination, but it is in the Bosniak section of the city and for that reason many Mostar residents of other ethnic backgrounds had never set foot on the bridge.

Crossing the Stari Most bridge was an iconic step in bringing the ethnic communities of Mostar together, and it had a great impact on those who participated: “Now all those people are working and even living in different parts of the city, they can work together and nowadays we have fewer and fewer people who decide not to cross this bridge. Now the people of Mostar are really happy and proud to have this bridge as part of their home town.”

Lejla has continued to work on peacebuilding in Bosnia-Herzegovina. Later on during her secondary school she participated in exchange programs with a school in Richmond, Virginia in the United States. The exchanges brought together youth from Mostar, a city facing divisions between Croats and Bosniaks, and Richmond, where racial inequality remains a problem. Since leaving school she has been involved with the United Religions Initiative, where she works to bring together young people not just from Mostar but from the entire Balkan region. In a region which has gone through so much conflict in the last decades, URI helps build bridges between people of different religious and ethnic backgrounds to show them how much they do really have in common. Lejla Hasandedic remains committed to working for a more peaceful and sustainable Balkan region.

Story: Lejla Hasandedić is a 27 year old peacebuilder from Bosnia and Herzegovina. She works as a psychologist at Psychiatry Clinic in Sarajevo, but also strives to contribute to peace on a daily basis. She an activist in the Global Network of Religions for Children; a youth ambassador and the assistant of the coordinator for Europe in the United Religions initiative; and is the coordinator of the youth club Tignum in Nahla – an interfaith base organization.

Artist: Óscar Bermúdez Pena (Madrid, Spain) – This artwork transmits the equality and the power of geometry. Simple shapes come together to form a connecting system, just like the Stari Most bridge. The identical hands allude to equality between races and beliefs. 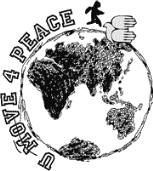